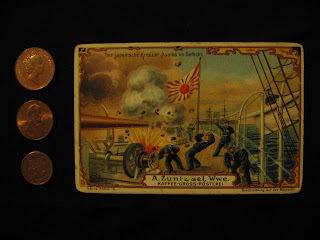 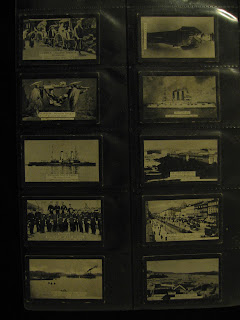 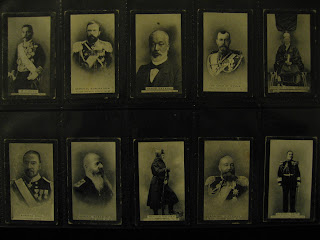 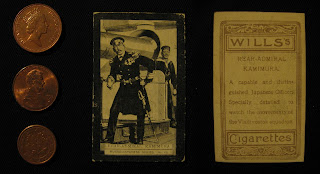 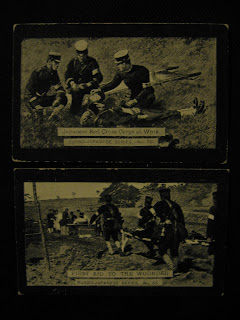 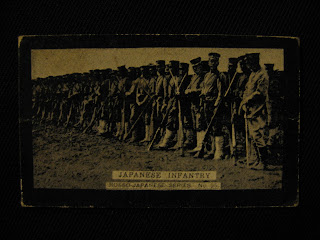 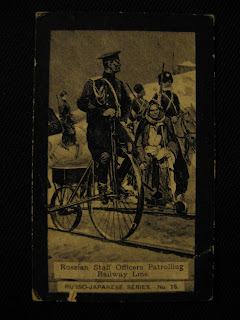 (I'm only short of number 51 for a complete set, if somebody has a spare one, please let me know! I also have a couple of duplicates to swap.)
Eingestellt von Markus @ Tsuba Miniatures um 12:40 15 Kommentare: 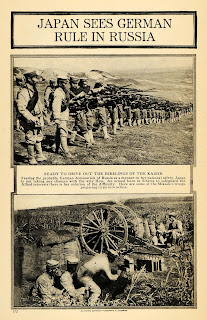 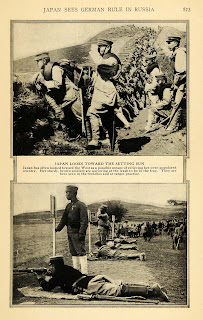 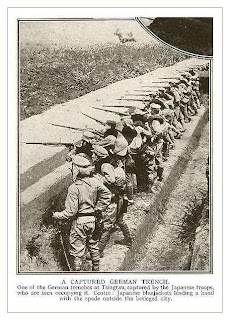 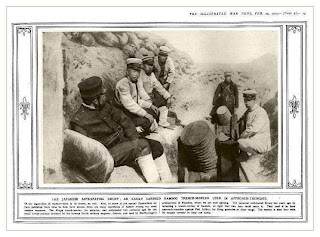 Here's another comparison shot, this time with a WW1 Russian by Musketeer Miniatures:

This photo was taken by Lt. Hazel of http://www.theleutnantsdiary.blogspot.com/ fame. Thank you very much Jan!
(Please check out his blog for some really great painted miniatures. If you haven't already seen his outstanding work, you are definitely missing something!)
Eingestellt von Markus @ Tsuba Miniatures um 06:56 2 Kommentare:

Finally, I had a delivery from Redoubt Enterprises in the post box today. 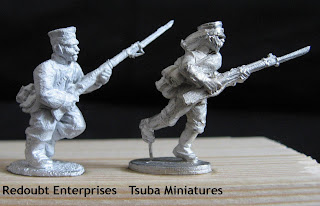 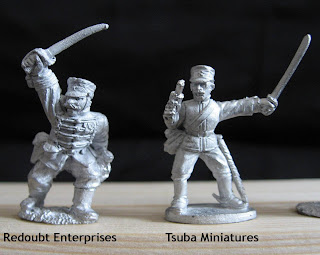 Please note, that the Japanese are meant to be slightliy smaller than their Russian opponents (at least those of Caucasian origin). This will be depicted by our miniatures.
Eingestellt von Markus @ Tsuba Miniatures um 03:51 1 Kommentar: 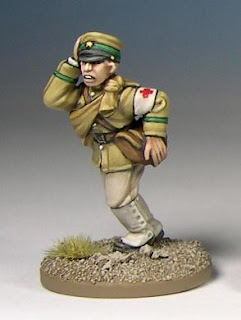 In some fora the question arose, if the Japanese medics really wore the Red Cross armband in action. There are quite some photos showing them with the armband during different stages of the war and also wearing different types of uniforms. 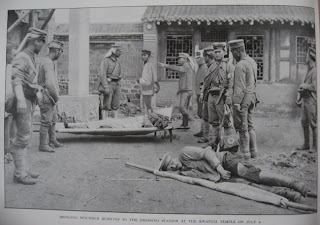 Of course, it would be pretty hard to recognize a medic on an old photo without it as long as he's not performing his duty (i.e. attending a wounded or something similar). On the other hand, one could always argue that an individual doing so could also just be a regular soldier giving first aid to a comrad or a POW. 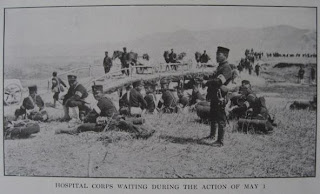 In the end I'd say it's up to you, if you paint your miniature like Simon did with our showcase miniature or if you just file the armband down a little bid  or use a small amount of green stuff or miliput to cover it up (you could also just leave it as it is and paint it in the same colour as his jacket).
However, it would certainly help to make the medic stand out from the rest of the khaki-clad soldiers. 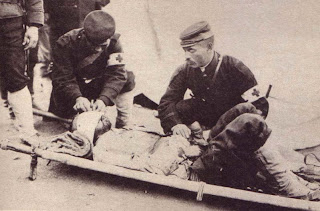 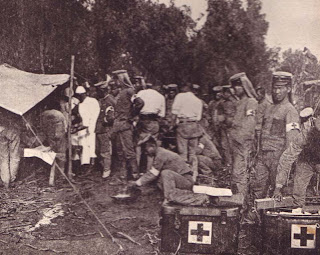 I got a copy of the famous "A Photographic Record of the Russo-Japanese War", published by P.F. Collier & Son, New York in 1905. 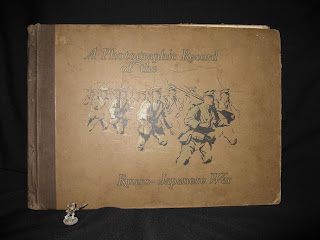 This massiv tome (over 250 pages and nearly A3-Size) is one of the best sources, if not THE best source, of actual photos of the war. (I've included a Tsuba Miniatures NCO for size reference.)

I've meant to get one for a decent price for over a year now and finally Lady Luck was smiling over me! If you are interested in the RJW you should definitely get one yourself. Quite some of the photos of other, more recent, publications (like the two Ospreys volumes for example) can be found here and a lot more. In fact, it has already given me the ideas for at least one more set of miniatures, which I haven't had already on my long to-do-list, just by flipping through it.

As it has been published over a hundred years ago, I think it's OK for me to post photos from it to clarify a couple of queries which have come up. Most prominent, if the Japanese Medics wore the Red Cross armband or not. (I'll try to get these photos up here by tomorrow.)

I'm also working on a couple of scale photos of my miniatures with those of a other manufactures but I'm still waiting for one delivery.
Eingestellt von Markus @ Tsuba Miniatures um 03:40 Keine Kommentare:

Hello and welcome everybody!
This is the first post on my first blog, so don't be suprised, if something isn't working/looking as you might be used to it from blog pros. ;-)
(Also, English is not my native tongue, so please excuse any mistakes due to this and please let me know, if anything is unclear!)
My name is Markus and I'm from Germany. This blog is dedicated to my favourite hobby: collecting, painting and even playing with little lead soldiers.
I'm 'in the hobby' for almost twenty years now and I felt it was time for something new. Instead of just collecting (i.e. buying) miniatures, I thought why not make my own?
The subject was found pretty fast as I've been interested in the Russo-Japanese War for quite some time now. I also decided right up front, that I wanted to go for a 'campaign look' of 'my' miniatures. 'Real' soldiers, gritty looking in their field uniforms not those clean and polished parade ground ones.
Next I got in contact with Paul Hicks, who is the sculptor of some of my all time favourite lines of miniatures out there (Anglian/Empress Miniatures Spanish Civil War, Musketeer Miniatures Irish War of Independence/Very British Civil War, Brigade Games Atomic Café '57, to name just a few and not to forget his very own line he produces under the name of Mutton Chop Miniatures), and he agreed to do the sculpting on my little guys.
The fine chaps at Griffin Moulds are responsible for moulding and casting, and they've done a great job, and the shown examples haven been painted be the very talented Simon Bradley of Stone Cold Lead Figure Painting.
So, here we are now, with the first three sets of Japanese soldiers wearing the M1904 khaki uniform and charging a Russion position:

If you'd like to get some, just get in touch with me via: Tsuba-Miniatures@gmx.de
The prices are 7.50 Euros for each pack of four (4) miniatures or 35.- Euros for a bundle set of one command pack (RJ-J01) and four trooper packs (RJ-J02, RJ-J03) of your choice, for a total of twenty (20) miniatures. (I will charge postage at cost.) (Please note that all miniatures are supplied UNPAINTED.)
Future plans include a HMG team (three soldiers + gun), four advancing/skirmishing troopers, four firing/loading troopers and a suitable command set to complete the Japanese infantry in M1904 uniform.
Eingestellt von Markus @ Tsuba Miniatures um 07:09 5 Kommentare: