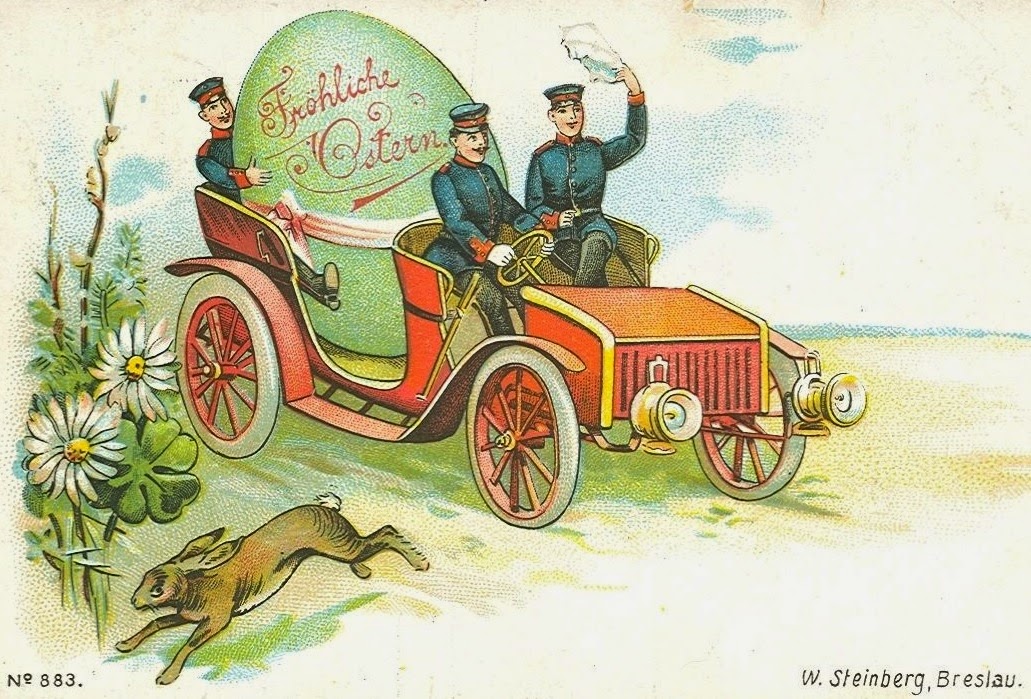 Good Source for the *erm* Source on the Freikorps Werdenfels

I posted the book Revolutionszeit im Bezirk Garmisch 1918/19 (German) by Josef Ostler (Mohr - Löwe - Raute) as the prime source on Freikorps Werdenfels in my little bibliography post on the subject about a year and a half ago.


Already at that point it was OOP and rather tricky to get for a decent price.

The user darkfire of the Sweetwater Forum just pointed out to me, that a book shop at Garmisch-Partenkirchen still has several copies of the book available. Apparently this shop was involved in the publishing in the first place.

Here's a link the shop: buchhandlung Adam
(If the link shouldn't take you directly to the book, just put the book's title given above into the 'Schnellsuche' (i.e. 'quick search' field.)

I can't comment on the shop's policy on shipping abroad or the shipping costs as I couldn't find that information on their homepage but it is surely worth dropping them an e-mail: buchhandlung.adam (at) t-online.de

Fresh from the painter's table, this time Simon Bradley of StoneColdLead Painting, these are now also available: 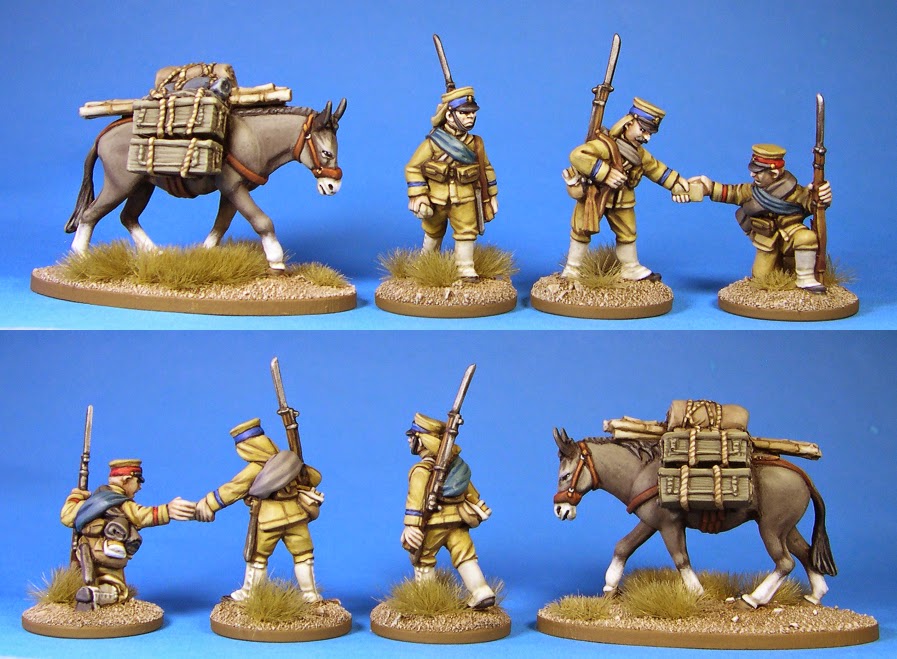 The two ammo bearers' carry the blue insignias of the transport/logistic branch of the army, while the soldier receiving the ammo pack is a regular infantryman.
This is a little bit of artistic licence as I couldn't find out, if these ammo bearers were actual members of the transport branch or maybe just members of the infantry regiments. Be that as it may, the blue makes a nice change from the regular red. ;-)

The second set is presumably of little use for actual gaming (well, maybe as distortion markers or something like that) but it would make nice dioramas, etc. 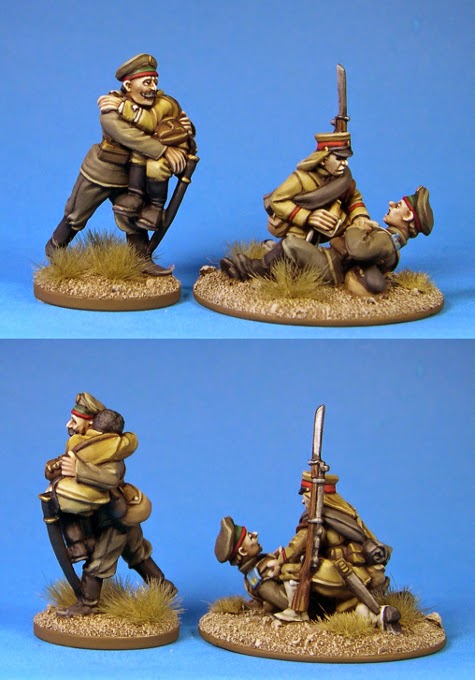 As it doesn't really fit into the Russian or Japanese category only, I put it into its own (Russo-Japanese Misc.). I hope to add more like this into this category to liven the gaming tables up. The next release on the list is the Japanese cavalry, though. ;-)
Eingestellt von Markus @ Tsuba Miniatures um 12:03 9 Kommentare:

Some people are curious, if there actually were sailors taking part in the fightings in Munich in 1918/1919. (Of course, the miniatures are suitable for all locations in Germany and beyond during this turbulent times.) 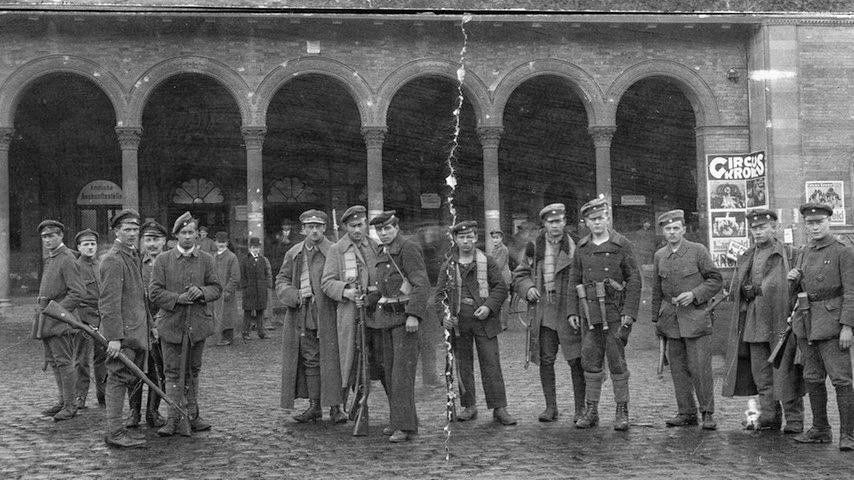 A photograph titled 'Rote Garde' ('Red Guard') showing revolutionaries in front of Munich central station. Note the two sailors in the middle of the photo (the right one with and the left one without the national cockade on the hat).

Although Bavaria was (and still is) a landlocked state and Munich itself is near the Alps there were sailors present and fighting during the German Revolution. After the Kiel mutiny in early November 1918, the spark that lit the flame of revolution, the sailor had become a symbol throught out the German states.
The men serving in the Imperial Germany Navy came from all states throught the empire not only from those with a long standing naval tradition. After the mutiny some just wanted to go home and ended up in the local fightings, while others were sent as part of units to assist the workers' and soldiers' councils and the new governments in the different cities and regions. The Volksmarine Division (People's Naval Division) in Berlin maybe being the prime example.

On February 15th, 1919 a unit of about 600 armed sailors arrived in Munich coming from Wilhelmshaven on the North Sea. Among them was Munic-born Rudolf Egelhofer, who became Stadtkommandant (town major) of Munich and supreme commander of the Bavarian red army in April 1919. He is supposed to have orderd the shooting of the ten hostages held at the Luitpold Gymnasium (grammar/secondary school), most of them members or at least associated with the Thule Gesellschaft (society). Egelhofer himself was arrested by 'White' troops on May 1st, 1919, severely mistreated and and finally shot without trial on May 3rd, 1919.

Some contemporary sources also claim that some young men who had never seen the sea in all their lives gathered sailor's uniforms from all kind of sources: shops for naval equipment, merchant sailors, costume rentals or theater props. The sailor's garb meant a hot meal each day and also a certain desirability to the ladies...
Eingestellt von Markus @ Tsuba Miniatures um 11:09 2 Kommentare: