As announced, here are two comparison photos to show the height difference between the Japanese and Russian miniatures: 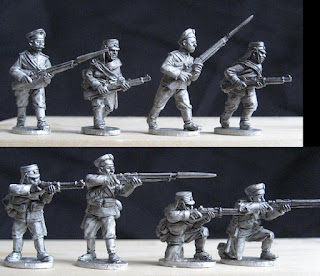 (What one has to bear in mind is that the Russian miniatures, so far, depict soldiers from the western, i.e. European, part of the Russian Empire.)
Eingestellt von Markus @ Tsuba Miniatures um 10:40 1 Kommentar:

I'm sorry again for the lack of posting! (University and my job are demanding quite a lot of time, not to forget my girlfriend... Hey Beaky!)

Fortunatelly, Stewart Griffin and his team haven't been idle either and I've therefore received the castings of the greens shown last time.

Here they are with nothing but a quick ink job to show of the details better (apologies for the bad photos :-/ ): 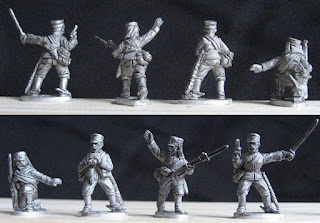 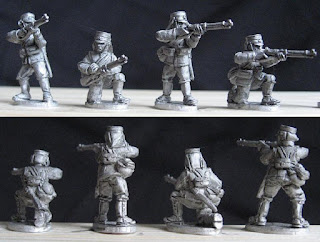 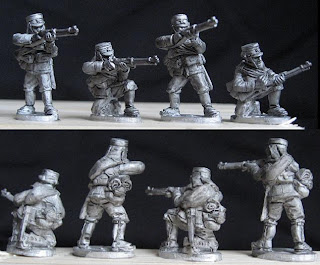 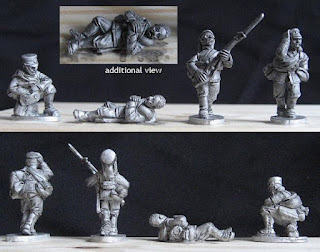 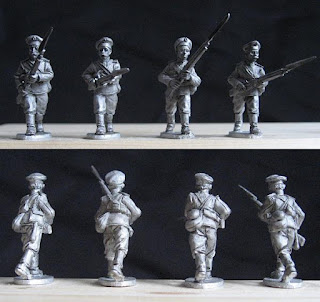 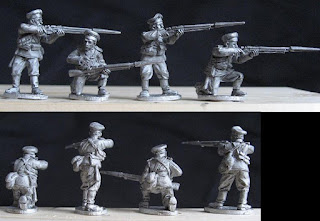 Here's also a photo mock-up of the Japanese 'command upgrade' set available for those, who have already bought the original command set before the reorganisation of the moulds:

Paul has also been busy and is currently working on the Russian officers and NCOs, one of each to accompany the advancing and firing troopers respectively.

Important note for those thinking about ordering: To ease the handling and not to put those on a disadvantage who would like a different ratio between their troopers and command miniatures, the 'unit set'-deal is no terminated. It is replaced by a '5-4-less' resp. 'five for less'-deal. This means you can pick just any five sets priced 7.50 Euros (that includes all the current sets) and get them for 35.- instead of 37.50 Euros.

I'll post two comparison photos with Russian and Japanese troopers as a seperate post shortly, to keep it easier to navigate through the blog.