Nothing miniature or Russo Japanese War related, just a quick note of what I got for Valentine's Day. ;-)

A bag of MITSUBA rice snack and couple of bottles of Tsingtao beer. As far as I know (and also indicated by the 'since 1903'), the Tsingtao brewery is in the tradition of the original German founded brewery, the first one in the whole of China. 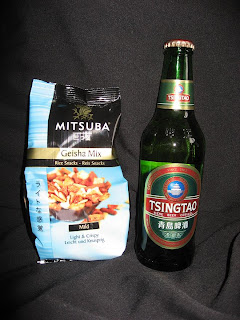 First of all, I'm sorry for the lack of new posts during the last weeks! (I'm right in the middle of my Bachelor's degree right now.)

Although not very active online, I have received a couple of interesting things:

Some more soap trading cards, this time from a company named Dr. Thompson ('the best, cheapest and most comfortable soap powder in the world'! As it says on the back of all cards.): 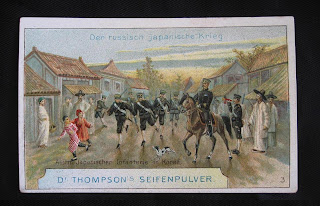 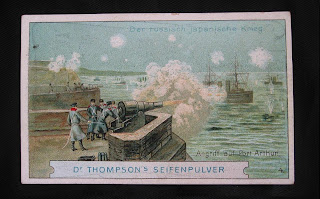 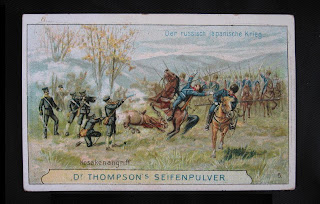 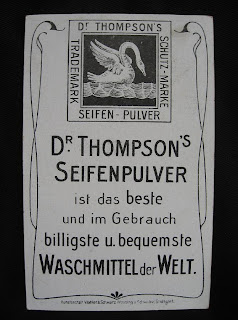 From top to bottom they show #3: Alert of Japanese troops in Korea, #4: Attack on Port Arthur and #6: Cossack attack.
Even more interesting and usefull, another contemporary book by P.F. Collier & Son titled, surprisingly, The Russo-Japanese War and published in 1904: 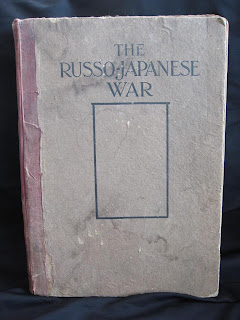 Again, the cover is pretty battered and also missing a photo/print, that must have been originally attached on the rectangle on the front. The pages are in way better condition and, most importantly, complete with no bigger damages. 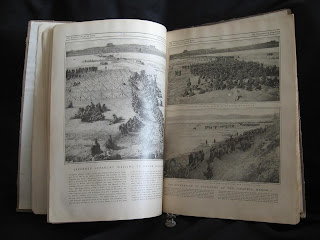 And last but not least, I got a tidy little package from Griffin Moulds with the castings of set number four, the advancing Japanese troopers (RJ-J04). Here they are straight out of the parcel with just a quick ink job, no cleaning work done at all: 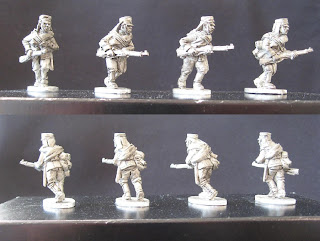 The first set has already arrived at Simon's, so they'll get an equally great paint job as their comrades as soon as he finds the time.
Eingestellt von Markus @ Tsuba Miniatures um 12:02 1 Kommentar: