First of all a big sorry for those, who are waiting for a Russo-Japanese War update!

The RJW will stay our main line (with hopefully many more miniatures to come) but it just beat another subject by a heartbeat when I had to decide, which range I wanted to get done over a year ago. A very close second had been the Freikorps Werdenfels.

But as we say in German 'aufgeschoben ist nicht aufgehoben' (i.e. 'postponed is not abandoned'). They had to wait a little bit before they could make their debut but Paul has been working on them over the last months next to the Russians and Japanese and finally they are here.


In short (I hope to post some more details over the coming days), these guys were part of the federal troops sent to Munich to fight against the Munich Soviet or Concil Republic in May 1919.

All miniatures sculpted by Paul Hicks with the notable exceptions of the Dachshund by eBob and the MG08, which is used under license from Musketeer Miniatures. All these miniatures have been painted by Andrew Taylor, as Simon is very busy (not least with some Russo-Japanese-War miniatures). This first release features the following five sets: 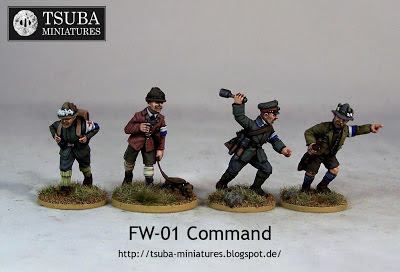 FW-01 Command
(containing a medic, an officer with a dachshund, a Stormtrooper/Veteran and a NCO ) 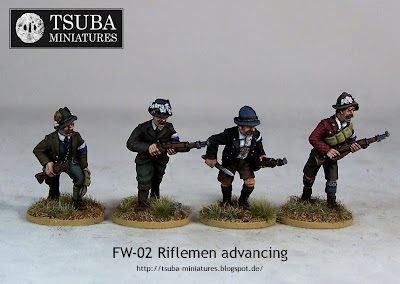 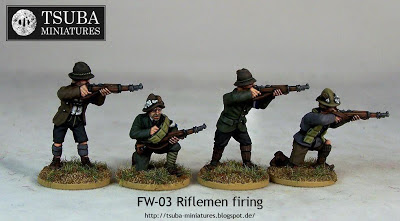 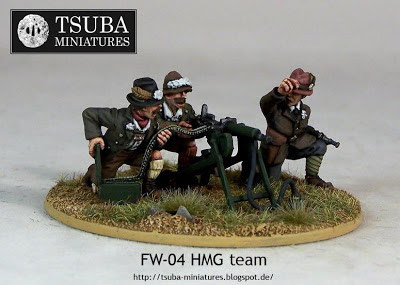 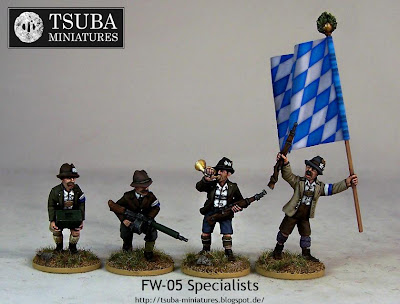 (containing a Bugler, a Standard-bearer and a two-men MG08/15 team)

All miniatures are supplied unpainted and some require some modelling work!

All the above shown sets are priced € 7.50 each and are eligible as part of a five-set-deal for € 35.- (you can also get sets from different ranges as part of the very same deal, i.e. you can mix and match Japanese, Russian and Werdenfels sets in one five-set-deal, if you like).

We also have a special 'Werdenfels'-deal containing one each of the five sets FW-01 to FW-05 and a sheet of paper flags (shown below) from Flags of War for € 36.-.

The 'Freikorps Werdengels' range also marks the start of the cooperation with Flags of War, which will also see flags for the Russo-Japanese War (starting with the Japanese). 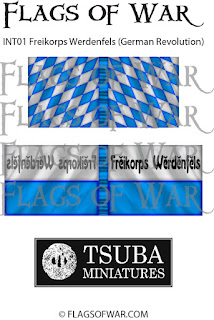 The 'Freikorps Werdenfels' flag sheet contains one generic Bavarian flag (that can be seen used on the painted example in the above picture of set FW-05) and a specific one for the Freikorps based on contemporary photos.
The sheet is available as part of the 'Werdenfels'-deal are on its own, in which case it is prices € 2.50 per sheet.

Some potential FAQs:
Q: Why the odd make-up of the command and specialist sets?
A: Basically that's due to historical accuracy. While the command set is supposed to be accurate (except for the dog), the specialist set is more of an educated guess with no photographic evidence (for example the standards are shown on a couple of photos but only on those showing in-camp and on-parade-scenes).

Q: Will there be any additions?
A: Well, that'll come down to the reception of this first 'wave'. Plans include an assault set (armed with SMGs and a two-men flamethrower team) and a couple of sets of Bavarian civilians.

Q: Which sets of rules are these designed for?
A: These weren't designed with a specific set of rules in mind so it's up to you. There are a lot of suitable interwar rules available, my personal favourite being 'Triumph & Tragedy'. There's a free T&T-supplement available for the Freikorps-era at the Lead-Adventure-Forum.

Q: What else besides the actual historical background can the miniatures be used for?
A: Again, that's up to you. ;-) Pulp games spring to mind (why should always those dastardly Prussians have all the fun?), they could be allies or enemies of Hinterland's Hussar ladies and/or maybe part of an Bavarian Venus or Mars expedition in a VSF game.
An interesting fact for the VBCW-fans, that Iain of Flags of War made me aware of, is that Rupprecht, Crown Prince of Bavaria was the heir to the Jacobite succession from 1919 until his death in 1955... so maybe after loosing his father's Bavarian throne, he might pursue the claimes he had inherited from his mother...